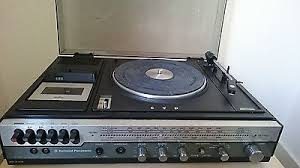 As 2016 draws to an end I can’t help thinking about my first few years as a dj. About 1983 was asked to provide the music for a friends house party. Armed with a record player (Music Center in those days) & separate tape player + some Christmas lights stuck to a silver painted board, I unleashed the power of my debut disco show onto a massive crowd of 7 people. Wielding my cheap Dixons stereo microphone I remember delivering a patter of witticisms & information to keep people entertained and dancing through the night to the enormous collection of 12 albums and 20 singles I had owned, borrowed and tapes I had recorded off the wireless. The evening was a complete success and i was hooked. This is what I want to be when I grow up ( as well as an astronaut , fire engine driver & movie star). I got paid an enormous fee of ten quid for the party. I was now a professional DJ.

I was in luck because my Dad backed me up in my mad pursuit by getting me a few gigs in the local Trades & Labor Club in town. On a Thursday night when it was empty I would go down and using the clubs equipment I would play music for a few hours for 20 quid. He had also spoken to my Uncle, who was a dance teacher and the owner of the prestigious North 20 Dance Team. So called because that was the post code. My mum & Dad were also amazing dancers in the team. The N 20 used to perform on Come Dancing  in the 70’s 80’s, you may have seen them on the telly. My uncle donated to me the old double deck disco consul from the studio. It weighed about as much as Jupiter, made of three quarter inch chipboard, covered in black snake skin vinyl. Inside was a 100 Watt amplifier & two Goldring Lenco turntables. They are the heaviest things on Earth if you have ever tried to lift one. The turntable platters were like man hole covers. But I was absolutely made up. The system came with two massive speakers, all the cables and the (as far as I could make out) worlds first radio microphone. The box it came in had straw in it. It took at leased two people to lift the whole lot, and god bless my father, who was usually the man on the other end, he even bought a Ford Escort Estate car to help me move it about from gig to gig. By then I was a young teenager who could not drive. I advertised at school for all the school discos, as well as at the local youth clubs and took on the world.

In the olden days of the 80’s I could not afford the latest lighting rigs so I had to make my own and modify cheap sound to light systems. Mainly large boxes with lights in that would flash on and off the the music. I used to look around for stuff and once found an old Rope Light with controller in a second hand shop for 10 pounds. A friend of mine had a similar interest and joined forces with me and spent some money on a few lights. Later on when we started to make some money and got a few more gigs we invested in some high tech stuff like the Pulsar Zero 4000 chaser, which worked of an 8 channel Bulgin plugs. This was the latest and greatest in lighting technology at the time. We created some large light screens with various 4 colour patterns and infinity tunnels. We also modified a clothes rail to hang a mirror ball with some spot lights plus a strobe. This seems so crude now when compared with my D.M.X 512 channel lighting system and laser show that I have now. I cannot imagine what we will be using in the future. 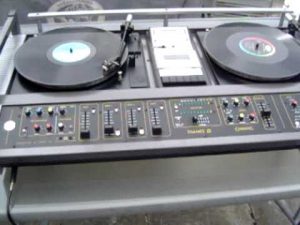 The success of my disco enterprise was quite rapid and the old N 20 disco decks were getting a bit tired. It was getting into the  late 80’s now & technology was racing ahead. I invested in the latest and greatest of it’s time The Citronic Thames II Micro  disco consol. Two turntables  with a mixer and 220 watt amp in metal cradle. This had a computer controlled auto cuing system  and auto mix that just looked so flash. The system also included a tape recorder in the middle. I also bought the best microphone I could afford at the time, Elecro Voice Pl 68, it made me sound like Tony Blackburn. In those days we played records,vinyl (sounds better than MP3 at any bit rate & if you don’t agree with me you are just plain wrong). There was only two major draw backs with vinyl. One, its very heavy and takes a lot of space. If you have ever tried to lift a box of 100 albums up and put them in a car you will know what I mean. Two it fairly delicate, records break and also scratch easily (so do CD’s but Tomorrows World negated to tell us this). Carrying them up to your bedroom after a gig with all the rest of the gear was not much fun, especially on a school night. As time went by the Thames was replace by two Technics 1210 turntables and a Gli Mixer, flight cased and ready to party. More parallel beam lighting effects, plus a couple of Sola 250 projectors with various kolidescope & oil wheels. I also used to rent an old style smoke machine. This was the one with an oil canister that used to cover the whole place in thin film of oil and turn the dance floor into a skating rink. Nothing like the one I use now which works with H2o, but still see some idiot coughing when you put it on. I suppose it must be a breath with your eyes thin for some people. 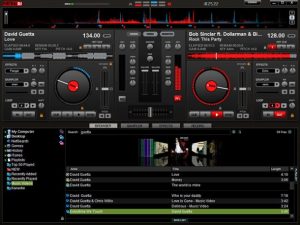 Now, in the modern world the computers have taken over. Although Virtual DJ 8 has not traveled back in time and tried to kill Sarah Conner. We do live and breath in a virtual world. Vinyl has been replace with Bytes and flows through the air wirelessly. You can download all your tunes from You Tube & iTunes or just steal them off your mates or the internet. Still, whatever you use to entertain with is irrelevant,. You still need a flesh & blood organic DJ, a person with a microphone. A personality that can play the right song at the right time and create a party atmosphere. I am now using the computerized disco decks and the mp3s, I have too. Picture a wedding disco in Rhodes, Greece, in July. Forty degrees, 98% humidity on a roof top with no shade from 6 pm, in Taverna that is 1 kilometer away from a car park. Suddenly mp3s, laptops & the internet are looking like the way forward . Who ever would have thought that the word ‘wireless’ would be cool again.